Euclidean distance and others: bikers, taxi drivers and the distance definition [Part 1] 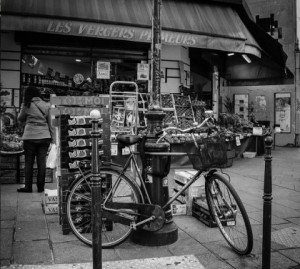 In these days I and a collegue of mine had a conversation on a recent law proposed by  Ségolèn Royal in French Parlament.

Shortly, this law would provide a monetary refund for those who go to work by bike; the refund is proportional to the distance covered every day.

After a moment, everyone of us started thinking at the main point of it; everyone knows that there are lots of choices of paths when going from a point A to a point B in a city and everyone knows that the paths have different lengths. Which of those paths is used for deciding the amount of money to be refunded? We agreed on the answer...the shortest one; and you, do you agree with us? Probably someone among my readers doesn't know there are a lot of way to calculate the shortest distance between two points. In this post we will talk about distances, the way used to calculate them and some basic concepts in topology and limits. 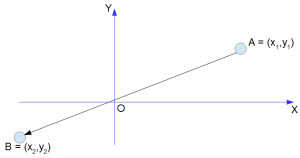 The formula for Euclidean distance between A and B is

really easy to figure out.

You are not the only one...

It is well known that the civilization improves and some houses are built on the spece between point A and B. 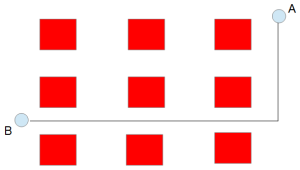 Our friend, now, has to change the way to go from home to work according to the streets available between the houses.

The employee will pass two houses in vertical direction (up - down direction on your screen) and three houses in horizontal direction (left - right direction) and this the shortest way from home to work and is surely grater than Euclidean distance... a lucky fact for the company who refund the worker.

This is a valid alternative to Euclidean distance in everyday life; for example when we drive we use the taxi distance to decide the shortest way to go from our position to the final destination.

But now we have a problem: in order to save some money, the company establishes to refund only higher distance between the vertical and the horizontal. In the case of our employee only the horizontal distance will be refunded (three houses versus two houses in vertical direction). This could seem a stretch of taxi distance but there is a refined equation to express this distance:

this is called distance of infinity.

At the end, there is another distance we can investigate: the minimum distance. It is obtained changing max with min in the distance of infinity; simply only the shortest distance is kept in account and is written as

As we have seen, there are lots of different distances between two points. We are more familiar with some definitions of distance than others but, each definition given above, is a valid distance in the physical word.

An entirely mathematical definition rises up some questions; What is the best way to measure a distance? How many different distances are there?

We will answer these questions in reverse order. With a little imagination we can suppose that there are infinite ways to define a distance. From a mathematical point of view every equation involving subtractions of coordinates of two points is a distance. After this answer, some of us are starting to have doubts the existence of a universal definition for distances.

Some rules for a good distance

First of all, a distance must be "positive defined"; in mathematical linguage this means that the value of a distance must be greater tha or, at least, equal to zero but never negative. It sounds so intuitive and everyone agrees that a distance between two points must be positive or zero (if the starting point coincides with the arriving one). I want you notice we are not considering vectorial distance that is positive in one direction and negative in the opposite one.

The second criteria is an extension of first one; it underlines that the distance is zero only if the starting point  and the arriving one coincide.

In this case a little deviation is necessary. Suppose our biker travels from his house to another and suppose this new house is in the same street of his company. 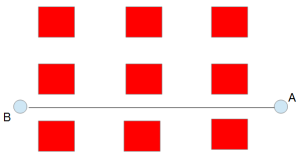 Switching back to our criteria; the third is the symmetry of the distance calculation. It can be written as

The distance from A to B is the same from B to A and this is intuitive too.

The last criterium is the most important one and is called triangular inequality. 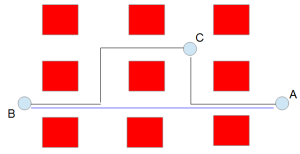 Suppose our biker, before going to work, needs to leave his son at school; to figure out the scene we suppose the school is in the point C in the above figure. If C is on the path from A to B there is no distance increase and we can write

Putting all together we obtain the triangular inequality

With the triangular inequality we have completed the criteria and this discussion too. In the next post we will talk about metrical spaces and topology.

Geometry
The discovery of Neptune: the science overcomes itself
Game Of Math: The MaxEnt Algorithm and Game of Thrones.