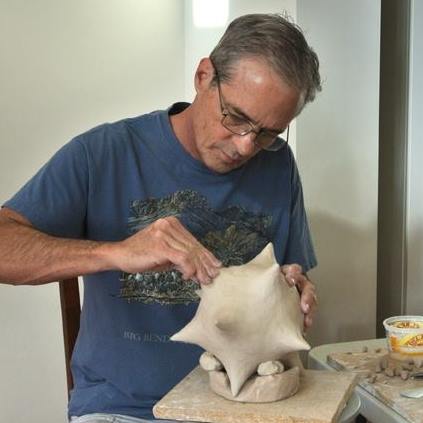 Mathematicians, to prove their theorems, write on blackboards, paper, and parchment; as history tells us, even sand, like Archimedes. One uses clay.

Here we present the work of Robert Fathauer, a physicist/engineer/mathematician with a  special skills for the arts, from clay modeling of mathematical forms to computer-coded tessellations. His recent book "Tessellations" summarizes years of science, research, and enjoyment. 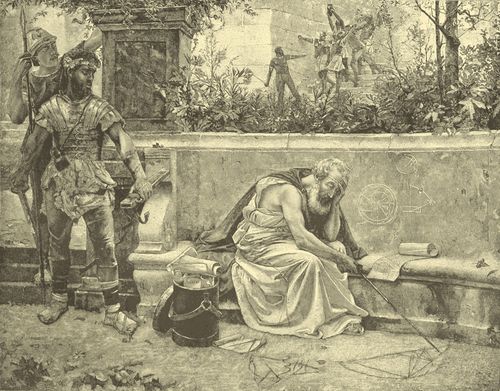 MM: Your book is titled “Tessellations: Mathematics, Art, and Recreation.” What is a tessellation exactly?

RF: A tessellation is a collection of shapes that fits together without gaps or overlaps to cover the mathematical plane. It can be applied more generally to other surfaces like spheres, and real-world objects like baskets. 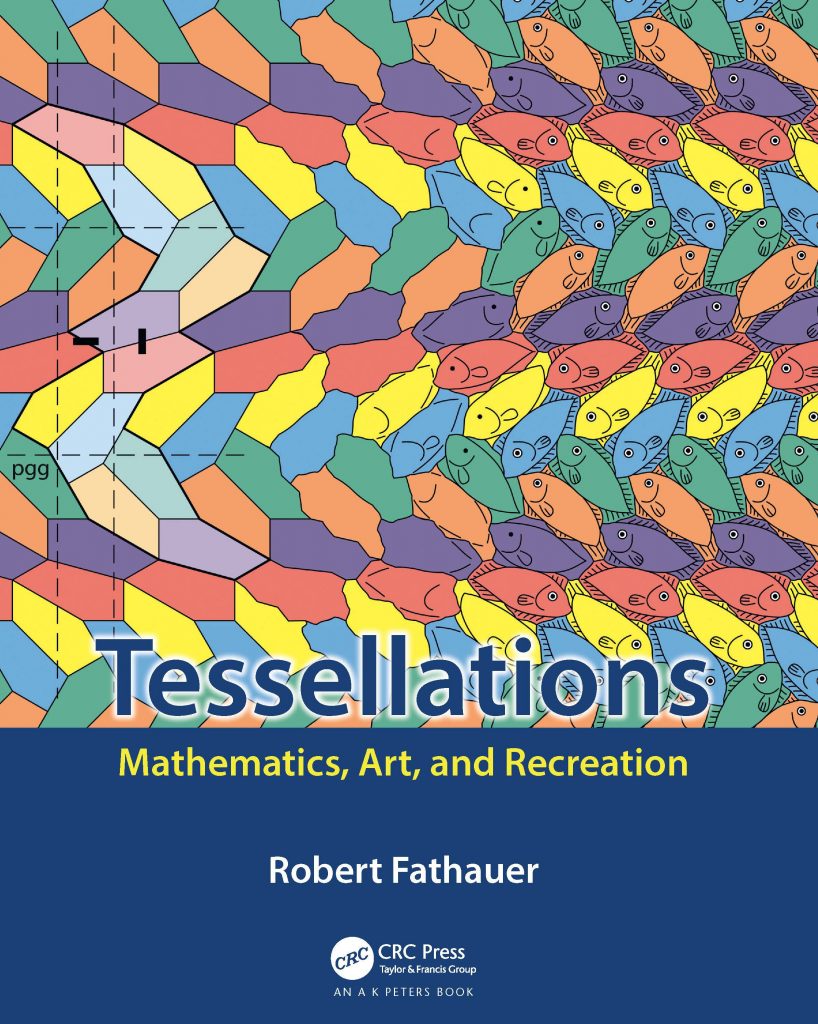 MM:  By what (or whom) are you inspired to creating tessellations?

RF: I was mainly inspired by the tessellation art of M.C. Escher, who made drawing of birds, fish, and other creatures that fit together with no gaps between them.

MM:  You are often referring to the importance of Escher’s work for your art and science. Do you feel more ‘yours’ the Escher of the impossible, of the labyrinthine, or the Escher of tessellations' perfect equilibrium?

RF: I’m drawn to all of Escher’s art, including his impossible structures, but it’s his tessellations that I have studied the most closely and used in my own work. 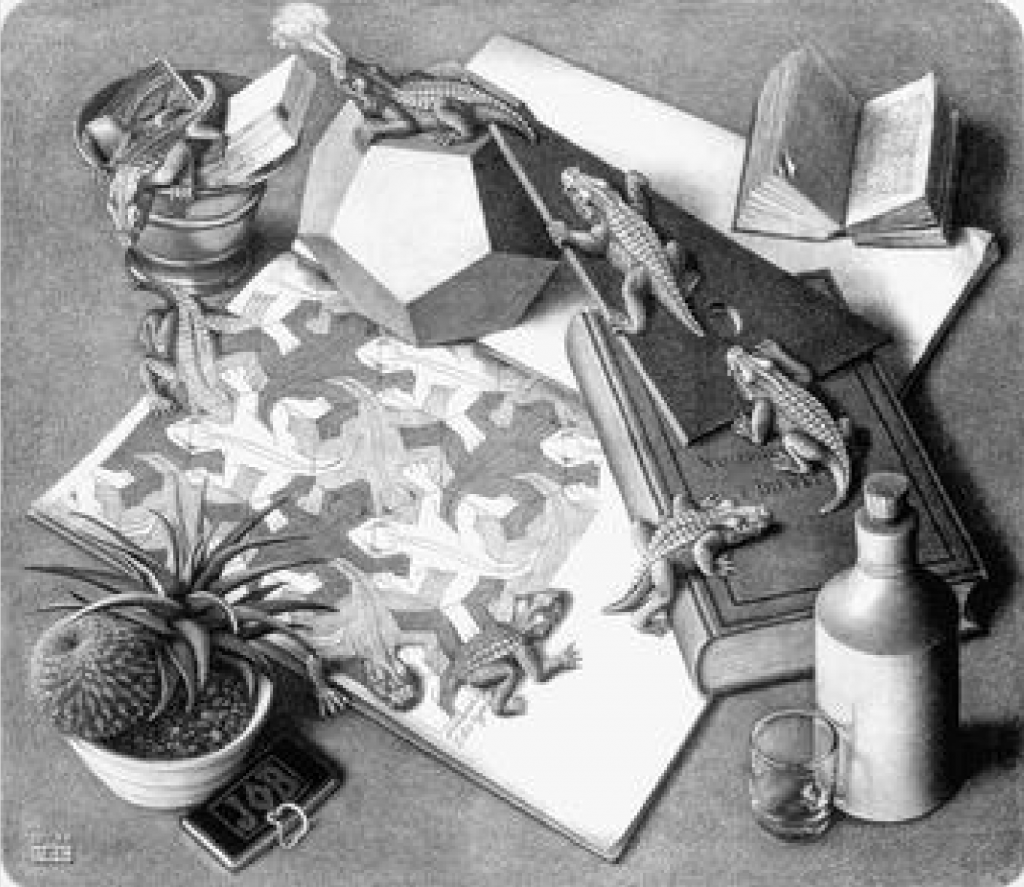 MM:  “Mathematics, Art, and Recreation”: is one of them prevailing?

MM:  Your book contains several models to build and modify tessellations. Is it a book thought of for a pedagogical framework, for kids, for math-passionate?

RF: It’s really for anyone who loves math and art. It’s not written for the professional mathematician or as a college textbook, but there is a lot of material that can be used by K-12 math teachers.

MM: Did pattern study and research change anything in your way to see the world?

RF: I do notice patterns and symmetry more than I used to, both in manmade things and in nature. I’ve become more aware of how the same types of patterns occur in many different places in nature.

MM:  In mathematics textbooks, spiraling shells do often appear. In your book, you explain how to approximate them starting from adjacent triangles. Can you explain to the reader how to build them? While you are building them, does it happen to associate these figures with a movement, a rhythm?

RF: A lot of things can be arranged in spirals, particularly Archimedean-type spirals, ones in which the spacing between arms remains constant. These can be built with squares or equilateral triangles, for example. There are some artists who like to make spirals using rocks, leaves, and the like; e.g., James Brunt or Andy Goldsworthy. I don’t particularly associate spirals with particular movements or rhythms, but spirals in graphic designs do create a sense of motion, as well as evoking infinity. 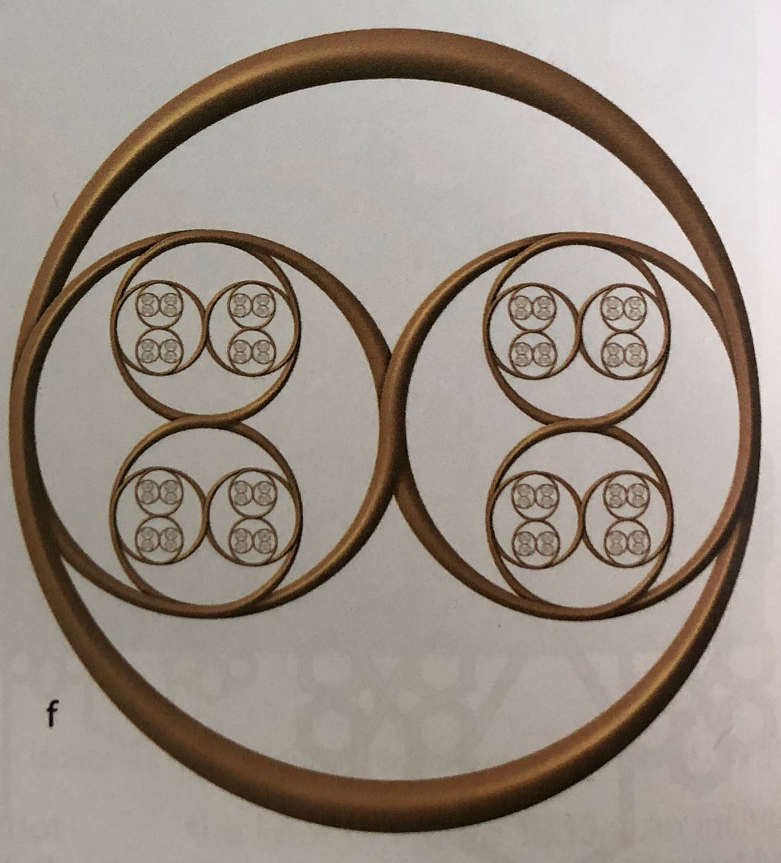 Detail from Figure 18.13  from "Tessellations"

RF: If you want to physically build knots one approach is to bend copper tubing and join the two ends. Nat Friedman, one of the pioneers of the modern math-art movement, used to build knots this way. Knots can also be made from ceramics, but it’s not the easiest material for making knots. Other techniques that require a lot of skill and patience are wood and stone carving. A simple way to make models and understand knots better is just to bend a strip of paper. 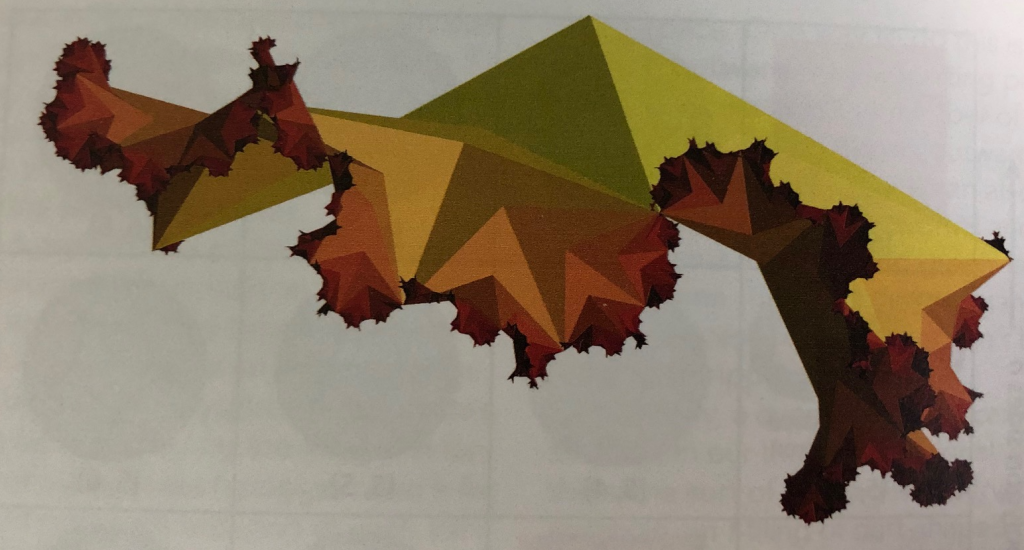 RF: In a tessellation in the Euclidean plane, the angles of the tiles meeting at a point (a vertex) sum to 360°. In a hyperbolic tessellation they sum to more than 360°. Tessellations with angle sums greater than 360° can be built using construction toys like Polydron, in which polygons can be snapped together in different configurations. There are also techniques to make hyperbolic surfaces using paper. One approach is shown in this pdf by Chaim Goodman-Strauss: http://www.eugenesargent.com/g4g11/giftbag1.jpg 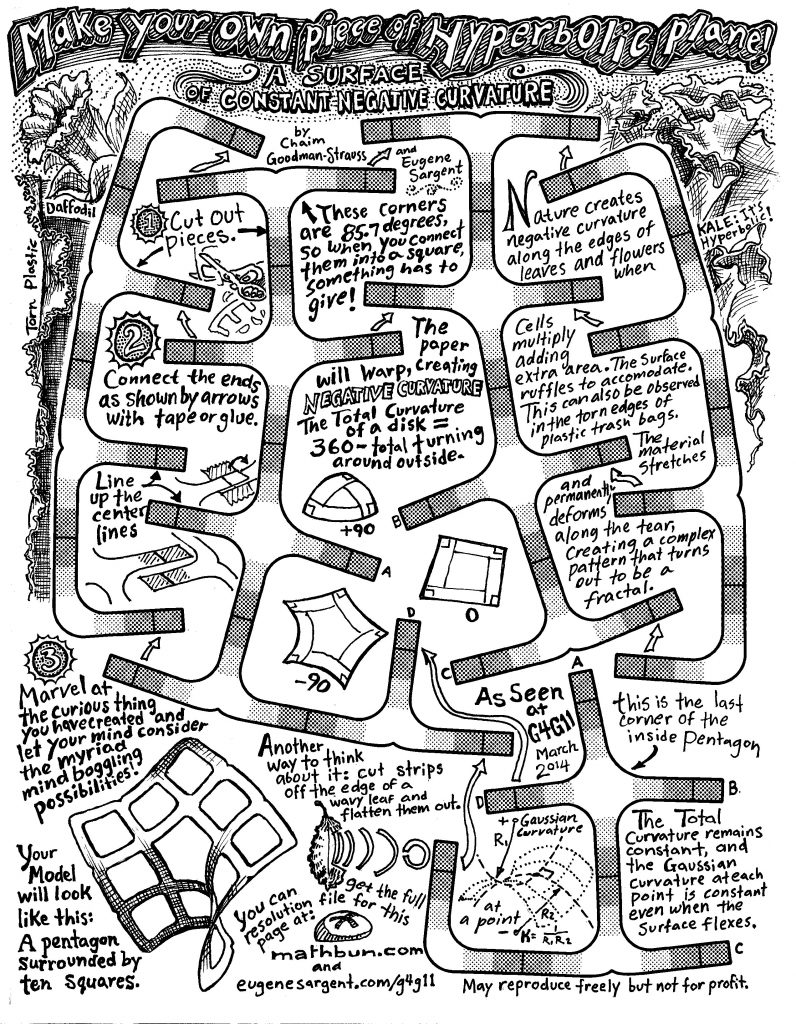 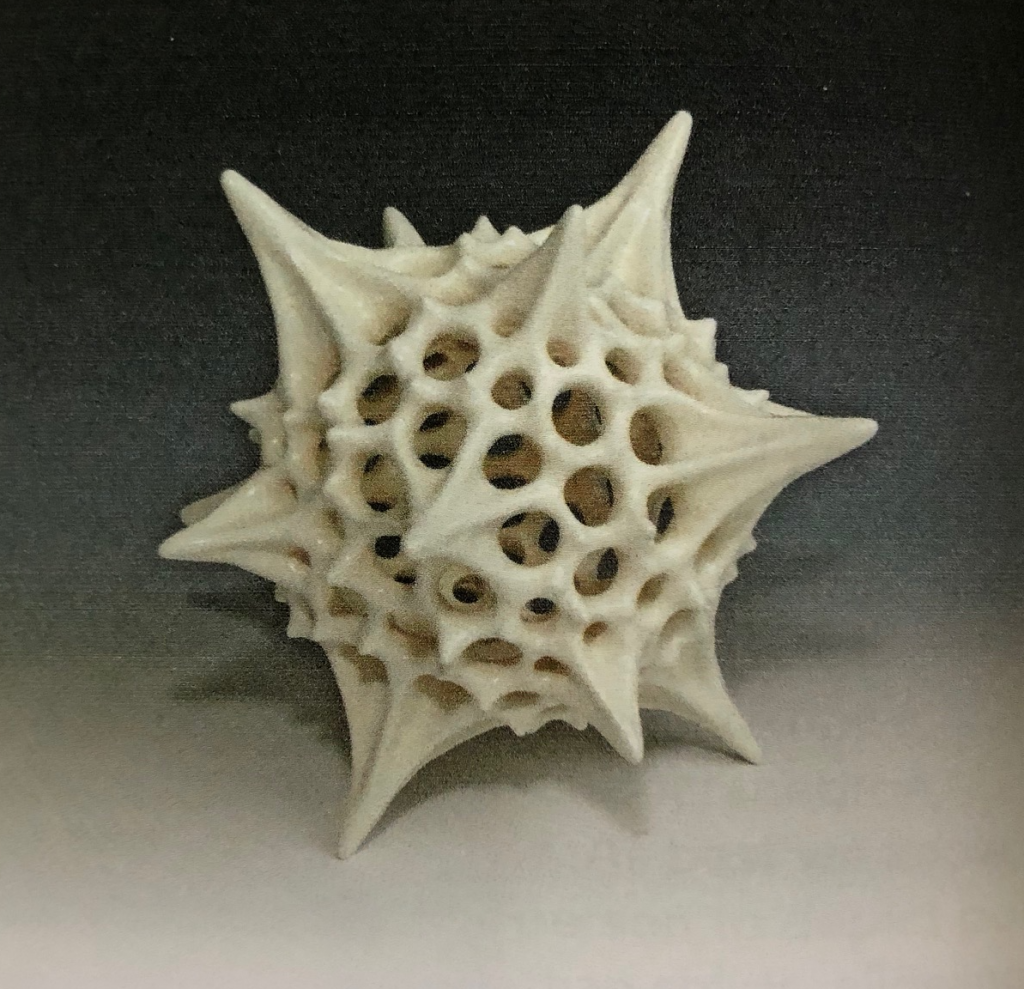 MM:  Figure 20.10 shows one of your ceramics, “Radiolarian Form.” From D’Arcy Thompson to Haeckel, till Gaudí, radiolarians' symmetries have been exerting a strong appeal for artists and scientists. What are they for you?

RF: I find the geometric intricacy of radiolarians fascinating. It’s also interesting to me to compare them to different polyhedra, particularly the Goldberg polyhedra, which have large numbers of faces. Just the fact that nature creates such things is wonderful and amazing.

MM:  Different from drawing, what does it mean to create a form with clay or ceramics?

RF: Thinking and visualizing in three dimensions is much more challenging than in two dimensions. I try to plan out my ceramic pieces so that they will look interesting from different angles. I think this is a key feature that gives sculpture something extra that two-dimensional art doesn’t possess. There is also the act of working clay with your hands that involves muscle memory, so that making mathematical forms relies on feeling as well as seeing. 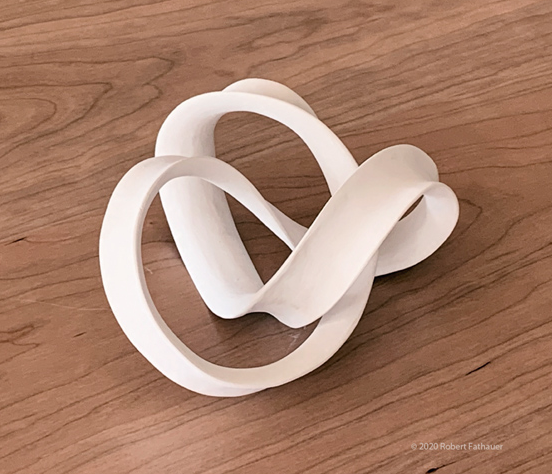 MM:  You have a background as an electrical engineer (Ph.D. at Cornell), with math and physics studies in college. You also have a past as a researcher at the Jet Laboratory Propulsion in California. Amongst physics, math, and engineering studies, what did mostly influence your view of nature, and for which reasons?

RF: I worked with developing new types of crystalline thin films for electronic device applications. Crystal growth and analysis of these materials was a big part of my work. That’s how I became aware of symmetry and lattices, including diffraction patterns and electron micrographs of structures too small to see with the naked eye. That work influenced my way of looking at nature and made me more aware of the mathematics underpinning natural forms. 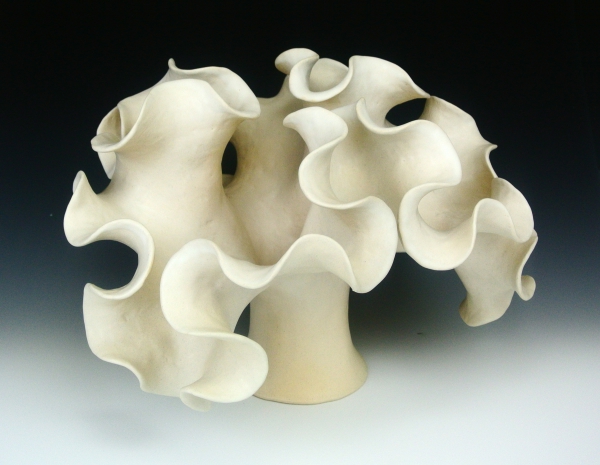 MM:  The book contains pictures and references from your travels, but also from the place where you live, Phoenix. Is the Arizona desert giving you unexpected insights, or, on the contrary, are your studies allowing you to enrich with meaning what you see?

RF: My mathematics and art explorations have made me more aware of tessellations, fractals, hyperbolic geometry, and polyhedra in the natural world. I look for these things in cactuses and other plants, rocks, and other landforms. Things I discover and observe in nature also inspire my art. Some of my ceramic sculptures start as polyhedra but then add organic features to become imaginary creatures not found in nature. 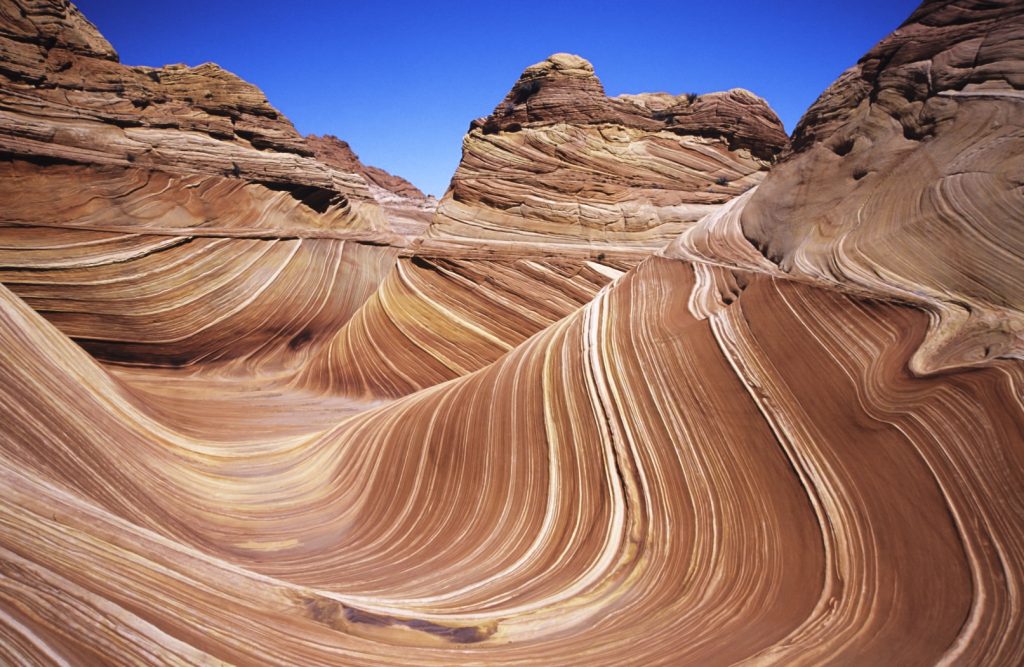 An image from the Arizona's desert. From Wikipedia https://it.wikipedia.org/wiki/The_Wave_(Arizona)

MM:  At the end of the Preface, you are hoping that your work will ignite in the reader the same love for patterns you feel, “if not an obsession!” Do you have any student learning these techniques, or, better, this art of tessellation?

RF: I’m not a teacher and don’t have a position at a university, so I don’t have any students learning directly from me. However, a lot of people, some of which are students, follow my social media posts, so they are learning that way. Students sometimes contact me by email, and I always try to be helpful when they do.

MM:  Thinking, creating, drawing, modeling, are characteristics of several genial personalities of the Italian Renaissance. To mention all but the most famous ones, we find Michelangelo, Leonardo, Raffaello. Which ones do you feel, or would like to feel closer to?

RF: I think my interests align better with those of Leonardo. Michelangelo and Raffaello were more pure artists, while Leonardo was interested in mathematical objects like polyhedra and knots, as well as in applying these concepts to design machines. 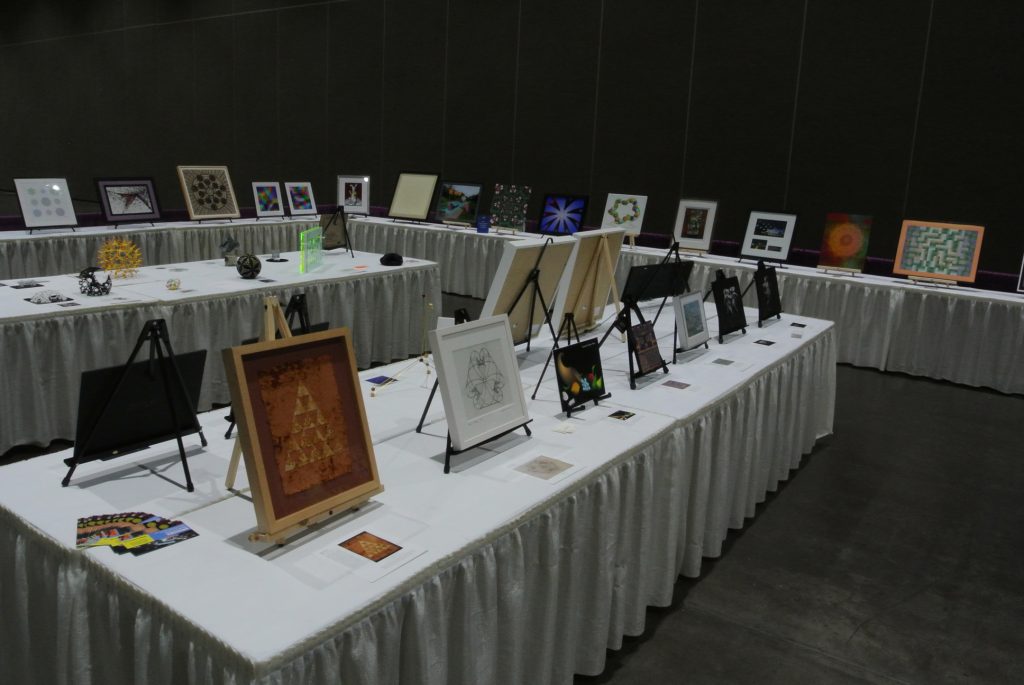 MM:  Each one of the countless collective exhibitions of mathematical art you have organized must have resulted in engaging experiences. Would you like to share some of them with our readers?

RF: It’s really interesting to interact with people making mathematical art in other parts of the world. People have different ideas of how to use mathematics in art, and people from different cultures bring their own unique perspective and esthetic. Sometimes I’ll meet someone who has been working for years without being in touch with other people making mathematical art, and they’re always very excited to meet like-minded individuals and to have their work included in an exhibition.