“Klein Concert”: a Report on a Geometric Journey 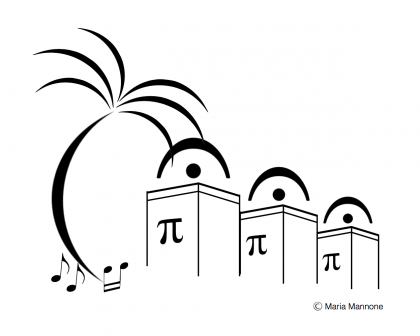 We often hear about

youth lost in the world of alcohol and drugs, but less often of young people pleasantly immersed within geometry. And because geometry is a mathematical concept, and it is possible to investigate a bottle's curvature, as well as any liquids including alcohol which may be expressed meticulously via precise laws of physics and mathematical equations, it is very clear that getting immersed in mathematics is less dangerous than getting immersed in drugs. Also, in the world of mathematics, there is not any restriction on peddling or distributing new ideas, or any dangers of trafficking such things. Further, mathematics is ecologically sound as there is no trash production because it is always possible to suppose that the non-existence of trash is to stock it within an empty set.

Thus, music sometimes arrives at a university and guides students to write down notes inspired to given shapes and forms. And, as an even more unusual thing, mathematics arrives at Music Conservatory, takes possession of pianos, strings, screens, and becomes almost a way of thinking and connecting notes, musical instruments, objects, and even emotions.

Yes, emotions. Because even a "cold" geometric form can stimulate philosophical thinking and give birth to metaphors. And music.

In the following, I'm presenting a report of two math-musical experiences realized in an English university and in an Italian conservatory.

Last October I presented some topics from my math-visual-musical theory to Creative Coding students at the University of Greenwich in London, a modern and dynamic environment, open to new developments of mathematics and technology. I asked students to compose music starting from a schematic form of a flower, a fish, a cathedral. The form of the fish has been the most chosen one, and on this model, each student expressed himself or herself in graphic-musical terms, less or more complex according to their personal background.

Since November 2018 to March 2019 I gave a course, or, instead, a "Cycle of Seminars," at the Music Conservatory of Palermo, a glorious institution that, for a long time, has been named after Catania's composer Vincenzo Bellini, and that has been recently re-named after Palermo's composer Alessandro Scarlatti. The building is a historic one, and, from the windows of the upper floor, it's possible to enjoy a sight on the sea. In this place, entire generations of musicians grew up, and in particular, generations of composers and conductors. I crossed the threshold of this place for the first time twenty years ago.

The "Cycle of Seminars" I created and run, titled "Sound, Gestures, Diagrams," proposed by conductor Maestro Carmelo Caruso and duly authorized by Conservatory's staff, has been organized in ten lessons, open to Conducting and Composition students. It has been a course of my ideation, based on math-musical studies, and, of course, on the experience in London. It has been timely and assiduously attended by five students, at different levels of Composition courses.

The first four lessons were based on theory: I presented an excursus between mathematically-described musical gestures, communication between conducting baton and orchestra performers, music derived from plants' geometry, as a water lily or a Ficus macrophylla  s. columnaris, a gigantic tree present in Palermo with remarkable specimens. Original examples have been alternated with nowadays classic ideas, such as Lindenmayer systems to formalize plants' growth. Ideas and references to “Flatland” and “On Growth and Form” appeared here and there.

Theoretical concepts led students towards a new way to envisage and connect different elements: from a complete form to its structures, and then to its "translation" from the domain of images to the codomain of music. And vice versa.

The fifth to ninth lessons have been organized in a workshop-lab style. I gave all students a unique theme, that each one of them interpreted according to his own sensibility and imagination: the "Klein bottle," from the name of German mathematician Felix Klein (1849-1925).

Klein's surface (usually called as "bottle" for a translation mistake from German) is a non-orientable surface: moving across it, we find ourselves inside the form, and then, keep moving across the surface, we are again outside of it. Conversely, surfaces such as the sphere have a boundary that separated the inside from the outside, and it is not possible to move from the one to the other without making a hole on the boundary. If cut into half, from the Klein bottle we obtain two Möbius strips. A Möbius strip is a mathematical object that inspired artistic thinking and scientific production, also in the field of mathematical music theory. The Klein bottle is a surface that lives in four-dimensional space, and, if represented in three dimensions, it intersects itself.

My interest towards such an extraordinary form was ignited in 2018 in San Diego, in California, during the Joint Mathematics Meetings, when I met the mathematician, astronomer, and artist Cliff Stoll, and I saw his stand full of fragile Klein-shaped glass bottles, that were attracting even most the abstract thinkers attending the conference.

If Klein bottle has recently been used as a study model in the field of mathematical music theory and of music and storytelling, to the best of my knowledge the works completed by my students are the first truly creative musical applications of this shape. The very original composition of (in alphabetic order) Marco Barilà, Mattia Camuti, Biagio Genco, Massimiliano Seggio, and Massimiliano Vizzini, even with their variety, take into account  both the musical rendition of theoretical topics and the music taste of their authors. On the other hand, even Xenakis himself made use of abstract models and of his musical ear at the same time! 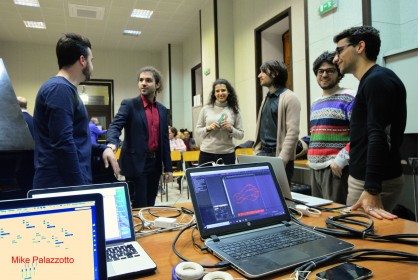 Preparation of the "preview of the première." Picture credits: Mike Palazzotto

The final works range from counterpoint interpretations of different paths on Klein's surface, to a quadraphony that wraps the listener and makes himself or herself immersed within the surface, where he or she is "listening" to the fourth dimension through the spatialization of moving sound; to the Shepard tone to give an idea of vertiginous rising and descending on the surface of the "bottle"; to the reference to Möbius strips; to the ancestral ouroboros meant as an "eternal return"; to singable melodies that quietly end after a journey where mathematical surface almost becomes an existential metaphor. Fundamental musical structures emerge from a geometric shape, and, vice versa, the geometric structure suggests musical sequences now melodious, now dramatic, but always expressive. Behind each composition there are deep creative ideation, thinking, choices, months of intense work, pages and pages of notes and schemes. All of them -- it must be highlighted -- lived by students with great enthusiasm and in addition to their commitments and their study load.

The tenth and conclusive meeting of the cycle of seminars happens, as Tosca was singing, by "caso o fortuna"  (by fortune or fate), in coincidence with the World Day of Mathematics: Pi Day! It has been the ideal opportunity to present a "Prima della Prima" (Preview of the Première) of the final event: "Klein Concert -- Five Compositions on a Geometric Shape."

In the opening, I presented the course's structure and organization; then, each student-composer described his composition, whose I performed some passages at the piano, synthesizing string score. Each step has been integrated by a sequence of slides. Closing section involved the integral listening of two compositions for electronic music on the given theme. 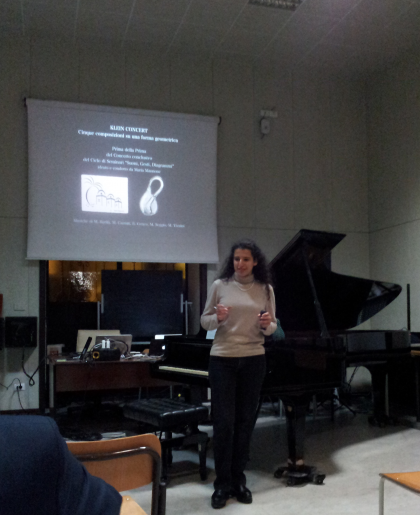 Beginning of the event on March 14, 2019, in Sala Sollima, at the Music Conservatory "A. Scarlatti" (formerly called "V. Bellini") of Palermo. A plastic model of the Klein bottle leans on the piano. 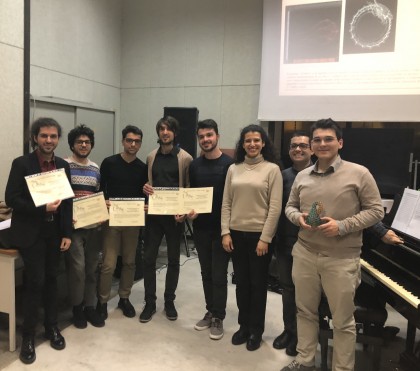 Course's students with certificates of attendance (from left to right: Massimiliano Seggio, Massimiliano Vizzini, Marco Barilà, Mattia Camuti, Biagio Genco), Maria (the professor), and the two conducting students (from the left: Antonino Sfar and Salvatore Barberi). The slide on the screen shows an image of the Klein bottle within a sound sequencer, and a representation of the ouroboros. Salvatore holds in his hands a plastic model of the Klein bottle.

For the Music Conservatory it has been a new experiment, and was considered truly successful. In fact, as I was expecting, given a specific extra-musical theme, all works, independently from their diversification, presented a common structure, that re-constituted essential lines of Klein bottle, that is, of the proposed model. All compositions are, in fact, within the same equivalence class given by the initial geometric theme, and thus they present a unity within the variety. Variety is an object of artistic interest, and unity, of scientific one. However, because varieties belong themselves to mathematics, art and science seem once more to merge together as the two superposed Möbius strips.

Joining Klein to Palermo wasn't an entirely random choice. Felix Klein belonged to the Circolo Matematico di Palermo, founded by Giuseppe Guccia in 1884. Its golden era ended with the death of its founder, in 1914, in coincidence with the beginning of the "Great War" that also destroyed communications between scientists of different parts of the world. The symbol of the Circolo was Trinacria or Triskelion (a very ancient symbol and emblem of Sicily), so familiar to mathematicians of that time, to be cited in a monograph on Simmetria by Hermann Weyl.

The Circolo included renown mathematicians such as Hilbert, Poincaré, and Noether.

If in 2018 Palermo was the Italian Capital of Culture, it is thus worth of attention reminding that it once was a sort of world capital of mathematics. 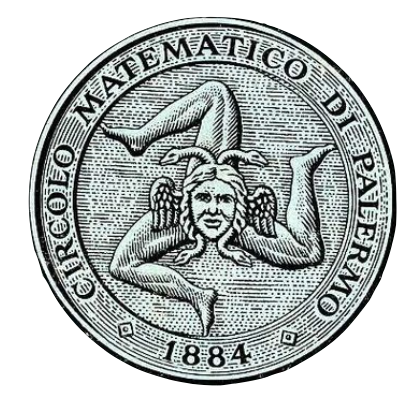 During the aforementioned tenth meeting, the participation of the orchestra had been planned, but it was unexpectedly postponed in extremis for technical and bureaucratic reasons. However, as inter omnes constat, if we can solve differential equations, even changing boundary conditions we can still reach the solution, even if it is different from the expected one. 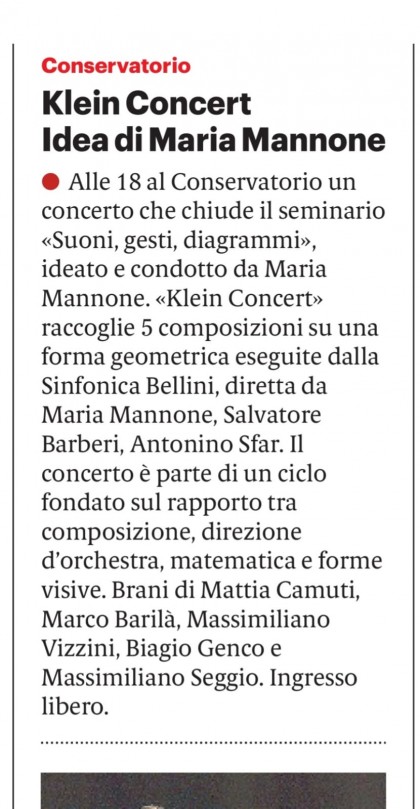 The highly-expected "Klein Concert" happened in May (with the orchestra!) at the Music Conservatory of Palermo. I shared the podium with two conducting students: Salvatore Barberi and Antonino Sfar. Here, the video of the concert.

Poster made by one of the students, Marco Barilà

applied math, Geometry, Mathematics and art, Uncategorized
Why Physics Matters. An Interview with Mikhail Shifman
The Smile of Math: When Categories Inspire