A mathematical language for juggling

We have all seen, at least once in our life, a juggler tossing balls in the air. Why is that so impressing at our eyes?

Despite having just two hands, any respectable juggler can juggle three balls at the same time. Considering for simplicity that one can handle one ball for each hand, how is that possible?

Let's try to analyze Animation 1. We can see that each ball is tossed by one hand to the other: the right hand tosses the balls to the left hand and vice versa. Just as the floating ball floating is about to fall down, the juggler tosses another ball up to free his hand and catch the falling one. Juggling three or more balls is possible only by iterating this principle.

The pattern represented in Animation 1 is known as three-ball cascade. Let's analyze now Animation 2 and compare it with Animation 1.

In this case we immediately note that the number of balls is still 3, but the pattern is different. Indeed, by observing it carefully, we see that the juggler tosses the three balls at three different heights.

As you can easily imagine, there is a wide variety of patterns and, if we were to assign a name to each pattern (as in the case of the cascade), we would have to make a prohibitive effort of memory.

For this reason Paul Klimek and Don Hatch, at the beginning of the 80s, independently invented a notation system to describe and name juggling tricks nowadays called siteswap. Afterwards, this system has been developed and extended by other jugglers, like Bruce Tiemann, Jack Boyce and Ben Beever.

For simplicity, we will describe the so-called Vanilla siteswap. This siteswap notation allows us to describe all the patterns where the balls are tossed asynchronously by a single juggler using both hands.

A limitation of the siteswap notation

Before going through the description of this notation method, we must underline that siteswap has a limitation. Let's observe the following two animations.

We have seen already the left-side animation: the three-ball cascade. The right-side pattern, known as three-ball Mill's Mess, is still a cascade but it's done by crossing and switching the hands' position alternatively. Even though the two patterns look very different, they have the same siteswap notation, i.e. they are identical. Indeed, if we focus on the trajectories of the balls with respect to the positions of the hands, we see that Mill's Mess is identical to the normal cascade.

Therefore, siteswap is able to describe juggling patterns by considering the height and the direction in which the balls are tossed (a ball can be tossed to the same or to the other hand) but without considering "how" the pattern is executed.

A number for each toss

After this quick introduction, we will now describe how siteswap works. The basic idea is very simple: we assign a positive integer number to each throw that corresponds to the number of beats (soon we will deepen this concept) that the ball takes to complete his trajectory. We use odd numbers (1, 3, 5, ...) for throws from one hand to the other hand and even numbers (2, 4, 6, ...) for throws from one hand to itself. The number zero (0) is used to indicate when one hand is not holding balls during a beat. 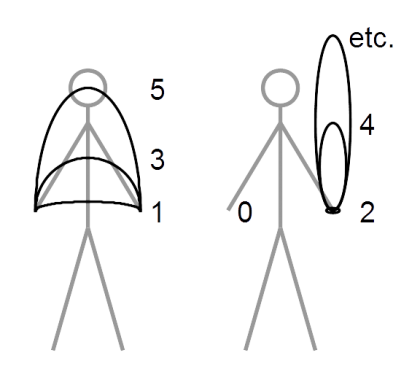 Therefore, the numbers indicate the height at which the balls are tossed relatively to the execution speed of the throws. Indeed, it is possible to toss a 5 with top height under our head if we juggle quickly, or over 3 meters if we juggle slowly. What really matters are the beats left to juggle other balls during the trajectory of the toss. This depends, of course, by the speed of the juggler.

Furthermore, as it is easy to guess from the animations above, the patterns are repeated cyclically. In other words, there is a period after which the pattern is repeated (identically or symmetrically). With the siteswap notation we only write the throws that identify the period of the pattern. For example, the period of 531531531 is 531. We refer to it as 531 by removing the redundant part and without loosing any information.

Once the concepts detailed above are clear, we can try to recognize some patterns:

Not every sequence of numbers is a pattern!

Once we are familiar with the concept of siteswap we can go through a little bit of theory. Let's try to imagine the pattern 432. First, say with the right hand, we toss a 4, i.e. the ball will falls in the same had. Then we toss a 3 with the left hand, i.e. the ball will fall in to the right hand. While the two balls are still completing their trajectory, the right hand executes a 2, in other words it performs a small toss to itself. What will happen is that the right hand will find itself with three balls falling on it at the same time. In siteswap jargon this event is called collision, and the pattern is impossible to repeat. Indeed, the sequence 432 is not executable.

How can we distinguish an executable sequence from a non executable one? Fortunately maths comes to the rescue! Indeed, there is a theorem that characterizes siteswaps and gives us a condition such that there are no collisions.

A finite sequence of non-negative numbers

is the number of digits) is executable if

returns the remainder of the division

Let's come back to the previous example and verify, using the theorem, that the sequence 432 is not valid:

It is clear that this siteswap respects the condition imposed by the theorem (and you can actually find it in one of the animations above).

Suppose now to have a valid siteswap, for example 534, How many balls do we need in order to execute it? Again we have another nice and helpful theorem used by the jugglers from all over the world.

Theorem on the number of balls

is a valid siteswap (where

is the number of digits), then we have that

Let's try how many balls we need for the  534 pattern:

The answer is 4 balls!

If you want to know more...

Do you think that those patterns are science-fiction? Try to watch the following video by Ofek Snir, a great juggler that executes (among other stuff) some very hard siteswap with 7 balls.

As already specified above, this article only talks about the Vanilla siteswap. Actually there are also siteswap notations to represent other categories of patterns such as synchronous, the patterns where one hand can hold and toss more than one ball at time (in jargon multiplex) and the ones executed by more than one juggler (in jargon passing). Here are some examples