Every day, everyone asks itself about the best way to move from a point A to a point B. Usually, if you are always late like me, you want to pick the shortest way. To define the shortest way between two points can be really easy in some cases but not in all.

All distances are different

We can consider, for now onwards, a metric space. By my previously post it is clear that a metric space is the only one in which we can define a distance. If we use an Euclidean metric is simple to prove, but also to understand in an intuitive way, that the shortest distance between two points is a line that directly goes from the first point to the second one. 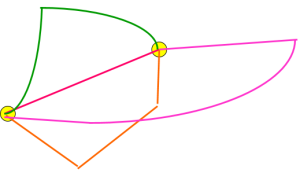 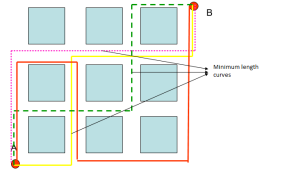 What is a straight line?

Everyone can draw a straight line across a paper, probably it depends on how good you are in drawing. Given two points we can draw the line from one point to other one. Our brain is used to think the outstanding space in an Euclidean metric so we can figure out a segment connecting two points as a piece of straight line. It is so easy.

According to the above definition in the taxi driver metric space there isn't a straight line (the minimum length line is not unique) and in the Euclidean space it is the so common straight line we are used to draw.

In the end we can figure out a particular space made by only 4 lines. The man inside the space can see only the four lines and can move only along one of them. No other paths or lines or space or points are accessible by him. 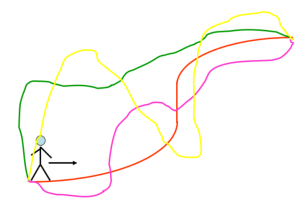 In the end, we can conclude saying we are in the same condition of the man described above. We are cheated by our limited space perception. To trick us is more easy than we can think.

You are walking on train rails, straight on; in front of you the way and you walk in the same direction. Are you moving along a straight line? I let you think for few seconds... 1... 2... 3...

No, you are not moving on a straight line. We are walking along a minimum distance path between two points on the Earth surface. 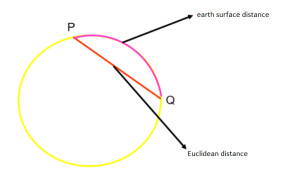 The difference between the two lines is as greater as the points are far away. If we move from one end to another of a football stadium the distance we travel is small if compared with earth radius. In this case the purple distance and the red one are really close each other and we can consider them as the same distance.

If the difference between the distance on earth surface and the Euclidean distance is neglectable for small distances it is not in the case of a flygth from Rome to New York. 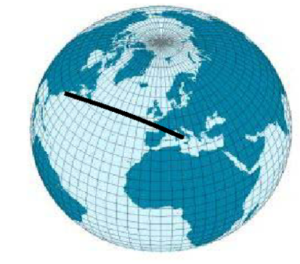 Looking at a planisphere we can see Rome and New York are almost on the same parallel. Intuitively we can think the shortest path between the two cities is following the parallel on which they are located. Another time the perception of the space tricks us so we are wrong again.

On earth surface the shortest distance between two points is called geodesic. The geodesic is obtained intersecting the earth with a plane passing for the two points and the earth center. The consequence of this is the parallel (except the equator) aren't geodesics. The meridians are geodesics instead. An airplane flying from Rome to New York don't follow the parallel but the geodesics that pass over the two cities (see figure above).

The concept of geodesics was introduced by Georg Friedrich Bernhard Riemann.

The failure of the fifth postulate

When in its books of geometry Euclide try to set up the bases of modern geometry, he fixed some definitions. These are indemostrable but are so intuitive that they don't deserve a proof. They are called postulates or axioms. They give us a basic definition basic geometric entities (points, lines, planes, circles, angles).

The most interesting postulate is the fifth. It say, more or less, that given a line and a point out of it, then these exists only one line passing for the point and parallel to the first line, for this reason it is also called postulate of parallel lines. For a lot of time some mathematics tried to deduce the fifth postulate from the other four because it did not seem very intuitive.

For a moment we can think about the straight lines are in the euclidean definition. The shortest line between two points. On the earth surface these lines are the geodesics. We can then try to apply the fifth postulate to the earth surface. We can draw a geodesics, keep a point on earth surface, not on geodesics, and draw a geodesics passing for this point. The two geodesics we have drawn intersect each other in two points. If we repeat the procedure for all points on earth we can find that given a line and a point not on it, there is no line passing for the point and parallel to the first line. The fifth postulate is wrong.

The hypothesis of the falsity of the fifth postulate give us another geometry. The elliptical one. In this geometry the first four postulate of Euclide are ture, the fifth isn't. Every theorems and consequences of the first fourth postulates is true again but aren't the theorems or consequences of the fifth postulate. We have a strange and not intuitive geometry but a valid geometry. The elliptic geometry is really relevant in all problems in which the distances over the earth surface are not neglectable respect to the radius such as navigation, orientation, positioning and long distance travelling.

In the end there exists another way in which the fifth postulate can fail. Given a line and a point there exists infinite lines passing from the point and parallel to first line. Also in this case we obtain a different geometry. It is consistent and valid and is called hyperbolic geometry. It was postulated by Lobachevskij. This type of geometry with the add of the time give the Minkowski geometry that is the base fo relativity theory of Einstein and is used to describe the behavior of the Universe over large distances.